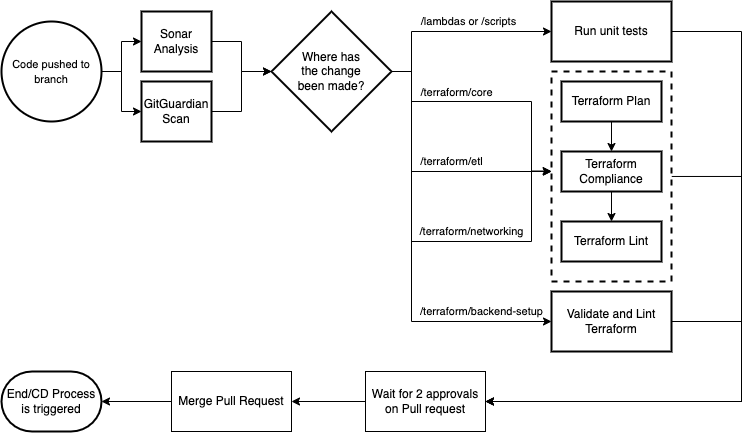 SonarCloud is a cloud-based code quality and security service. Sonar supports scanning of multiple languages out of the box and then reports on four main metrics, Reliability, Security, Maintainability and a Security Hotspot Review

Reliability is based on the total number of bugs in the repository or piece of code. A more in depth explanation of how the reliability metric is calculated can be found here: SonarCloud Reliability

Security is based on the total number of vulnerability issues in the repository or piece of code. A more in depth explanation of how the security metric is calculated can be found here: SonarCloud Security

Maintainability is based on the total number of code smells in the repository or piece of code. Code smells are pieces of code that do not cause bugs or any imediate issue however they are generally bad practice and lead to a build up of technical debt if not fixed A more in depth explanation of how the maintainability metric is calculated can be found here: SonarCloud Maintainability

GitGuardian runs on every pull request and also against the main code branch to detect API keys, passwords, certificates, encryption keys and other sensitive data. If any of these things are found in your pull request you will not be able to merge until the issue has been resolved. There are two options to resolving the issue, 1. Remove the password (or other sensitive information) from the repository and generate a new password so that there is no longer a security issue. 2. If GitGuardian has falsely flagged a piece of code as a secret than you can mark the issue as a false positive and continue with your work. Documentation for GitGuardian can be found here: GitGuardian